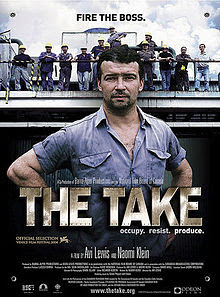 Produced by Avi Lewis and his wife, author Naomi Klein (The Shock Doctrine), the film documents the takeover of an abandoned Argentinian auto factory by its workers, who begin a long battle for the right to operate it as a workers' cooperative. Their actions give rise to a broader cooperative movement in the country.

"...a compelling and suspenseful cautionary tale documenting the consequences of globalization... universal in its implications" (Los Angeles Times).